On March 27th 2019, Israeli forces killed 17-year-old Palestinian, Sajed Abed al-Hakim Mizher, a volunteer first responder with the Palestinian Medical Relief Society (PMRS), who was shot dead by Israeli forces, while he was on duty tending to the injured during violent clashes between Palestinian youths and Israeli soldiers in the Dheisheh refugee camp, in the southern occupied West Bank city of Bethlehem.

Palestinian human rights organization Al-Haq has carried out comprehensive field investigations into the killing of Sajed Mizher, having collected sworn affidavits from eyewitnesses, prepared a field report of the incident, and collected images and other relevant documents on the case.

Al-Haq’s report outlines the facts of the killing, as documented by the organization, and provides contextual information collected in relation to the victim, while it further details the distortion of the truth by the Israeli authorities in relation to alleged footage of the killing distributed by the Israeli army and media, and sheds light on Al-Haq’s conclusions as a result of its detailed documentation and follow-up.

The special report also includes a set of key recommendations on accountability, including to third States, the Office of the UN High Commissioner for Human Rights (OHCHR), relevant UN Special Procedures mandate holders, the International Committee of the Red Cross (ICRC), the World Health Organization (WHO), and the Office of the Prosecutor of the International Criminal Court (ICC).

Following the footsteps of Razan al-Najjar, paramedic Sajed Mezher left our world after he had performed his duty and let the whole world know that Israel is an enemy of all that is beautiful and human.

Sajed Mezher, 17, was a volunteer medic at the Palestinian Medical Relief Society and an artist in Ibda' Band in Dheisheh refugee camp in Bethlehem.

"Will" was the name of the last show Sajed took part in. He played the role of a Palestinian martyr, chairman of Ibda' Foundation Khaled al-Seifi said.

A hatred-fueled bullet fired by an Israeli soldier ended the life of an artist and a health worker. Sajed was killed on 27 March while providing medical help to a wounded Palestinian citizen in Duheisheh refugee camp despite wearing a vest clearly marking him as a medic.

Sajed was rushed to hospital while in a very critical condition. In the last picture taken of him there he raises his hand giving the "V" for victory sign.

Sajed, who was in his last year of high school, was preparing for the graduation ceremony set to be held at the end of the second term. His grieving mother said that he asked her to buy him a white shirt for the ceremony, but he ended up getting "another certificate" as she said.

"We are proud of our volunteer work, but we need to be protected as paramedics. This is not the first time Israel kills paramedics," one of Sajed's colleagues said.

Abdul-Mahdi Gharib, coordinator of emergency at the Palestinian Medical Relief Society, said, "They killed Sajed, and Razan al-Najjar before, and many medics. Our work is humanitarian and it will continue to be so."

"Israel kills the Palestinians for being Palestinians. It doesn't distinguish medics from other people," Gharib added, "We will complete what Sajed started."

According to Sajed's father, Sajed, the volunteer paramedic, rushed to Duheisheh when he was informed about the breakout of confrontations during an Israeli raid on the camp. While he was trying to save the life of a Palestinian youth injured by Israeli gunfire, he was shot in the abdomen.

Crying, recalling the beautiful moments she had with him and the rest of the team, one of Sajed's colleagues said, "Not long ago we were talking about graduation. I asked him what GPA he wanted to get. He smiled and said that he would surpass us all and be the first one to get the certificate."

The doctor, who tried to save Sajed's life but couldn't, sobbed, "He was a kind young man and always fulfilled his duties."
30 mar 2019
Army Injures Many Palestinians Near Nablus 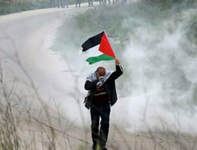 Israeli soldiers resorted, Saturday, to the excessive use of force against nonviolent protesters marching in condemnation of the ongoing Israeli violations against medics, near Huwwara roadblock, south of the northern West Bank city of Nablus.

The soldiers fired a barrage of gas bombs and concussion grenades at the protesters, causing dozens to suffer the effects of teargas inhalation.

Various political factions and social organizations in Nablus governorate have called for the protest near Huwwara roadblock, due to the escalating deadly Israeli violations against Palestinian medics, including the latest casualty, Sajed Mizhir, 17, a volunteer medic with the Palestinian Medical Relief Society, who was killed by army fire, after the soldiers invaded Deheishe refugee camp, south of Bethlehem, last Wednesday, March 27th.
28 mar 2019
Paramedic’s Father: “My son thought he wouldn’t be shot wearing his vest.”

A young paramedic volunteer was killed by Israeli fire, Wednesday morning, during violent confrontations that broke out in Dehehisheh refugee camp, in the south of Bethlehem, while wearing his medical relief uniform.

The father of Sajed Mezher, Abdul-Hakeem Mezher, narrated to PNN the last moments of the young man’s life and his determination to extend a helping hand to the wounded youth.

Abdul-Hakeem said that he woke up at dawn and was preparing his sons to go to their schools. Among them was Sajed, who was studying for a university exam. At the outbreak of confrontations, Sajed insisted on going out and helping the injured with the paramedic crews.

“He told me that he cannot abandon the wounded at this moment, saying he was trained to provide humanitarian aid at times like this. He told me not to worry and that he was protected under international law wearing his official uniform… but, he was still shot and killed.”

Popular committees announced a general strike following the killing of Mizher, who was buried in his final resting place at the Martyr’s Cemetery, in Irtas village.

Further confrontations broke out at the northern entrance of Bethlehem, following the funeral.

The Palestinian Medical Relief Society, in a statement, said that Sajed was shot in the abdomen with live ammunition as he was performing his duty dressed in his first aid uniform, during a raid by Israeli forces on the camp; he later succumbed to his wounds at the hospital. who called on its partners to condemn, unequivocally, this “severe violation of international humanitarian law by Israel, and to demand the immediate cessation of attacks on medical personnel and other protected persons.”
27 mar 2019
PCHR Report: In New Crime of Targeting Medical Personnel, Israeli Forces Kill Volunteer Paramedic in Al- Dheisheh Refugee Camp, South of West Bank 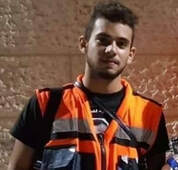 In a new crime of targeting medical personnel, Israeli forces moved into al-Walijah neighborhood in al-Dheisheh refugee camp, south of the West Bank, and killed a volunteer paramedic while treating injured protesters in the camp.

This new crime comes in light of the Israeli government’s escalation in the occupied Palestinian territory (oPt). This crime along with other crimes lately committed by the Israeli forces proves the latter’s intention to inflict more and more victims among the Palestinian civilians.

The Palestinian Center for Human Rights (PCHR) condemns in strongest term this crime and holds the Israeli government fully responsible for the tense situation in the oPt.

PCHR also calls upon the international community to assume its legal and moral obligations and intervene immediately to stop the Israeli forces’ crimes against Palestinians and provide them protection.

According to PCHR’s investigations and eyewitnesses’ statements, at approximately 02:00 on Wednesday, 27 March 2019, Israeli forces moved into al-Dheisheh refugee camp, south of Bethlehem. They raided and searched a house belonging to Mahmoud Waleed al-Lahham (27) and then arrested him. In the meantime, Palestinian young men gathered on the camp’s streets and threw stones and empty bottles at the Israeli soldiers.

As a result, a Palestinian civilian was hit with a live bullet to the foot and then taken to the Arab Society Hospital in Beit Jala for treatment. At approximately 06:00, the Israeli forces moved into al-Walijah neighborhood in the mentioned camp by a civilian vehicle in order to search for the wanted person Jehad Isaa Ma’alieh (21). When the soldiers could not arrest Jehad, they arrested his brother Ma’alieh (27) in order to pressure him to surrender.

As a result, a Palestinian civilian was hit with a live bullet to the shoulder and Saleh Faraj was hit with a live bullet to the hand while present in front of his house in al-Walijah neighborhood. When the Medical Relief Society staff was providing first aid to the wounded civilians, Sajed ‘bed al-Hakeem Mizher (17), a volunteer at the Medical Relief Society, was hit with a bullet to the abdomen while providing first aid to Saleh Faraj. He was then taken to the Arab Society Hospital in Beit Jala, where his health condition was classified as critical. At approximately 08:30, he succumbed to his wounds.

PCHR condemns the killing of paramedic Mizher and stresses that the Israeli forces’ attacks on Palestinian medical personnel while carrying out evacuations and transporting and providing medical assistance for the wounded is a flagrant violation of the rules of international law and international standards, which ensure the protection of medical personnel, including ambulance crews, their vehicles, and medical facilities.

PCHR emphasizes that the Fourth Geneva Convention relative to the Protection of Civilian Persons in Time of War and the Additional Protocols thereto provide special protection for medical personnel and humanitarian relief personnel in Article 14 and Article 24 of the Convention and ensures respect for the principle of freedom of movement for medical personnel, and providing the necessary facilities for carrying out their tasks, which include carrying out evacuations and transporting and providing medical assistance for the wounded and the sick.

In light of the above, PCHR calls upon the international community and the UN bodies to intervene to stop the Israeli escalating crimes and violations and work on providing international protection for Palestinians in the oPt.

These grave breaches constitute war crimes under Article 147 of the same Convention and Protocol (I) Additional to the Geneva Conventions regarding the guarantee of Palestinian civilians’ right to protection in the oPt. 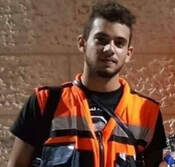 A Palestinian paramedic succumbed, on Wednesday morning, to wounds he sustained during clashes with Israeli forces in the Dheisheh refugee camp in the southern West Bank city of Bethlehem on predawn.

Medical sources confirmed that Sajed Abed al-Hakim Mizher, 17, who is a volunteer paramedic succumbed to his wounds.

Four Palestinians were injured with live Israeli bullets during clashes in Dheisheh.
Powered by